Osheen Harruthoonyanat is a Toronto photographer who works with black and white negatives and a wide range of darkroom tools to create uniquely emotional works of art.

This exhibition features works from two groupings: Nocturna Artificialia and Uchronie Fragments.The images are taken on 4 x 5 negatives and then manipulated using various physical tools and chemical processes. The resulting prints are huge and tactile black and whites with water marks, scratches, chemical markings & finger prints. The large still lives that make up the better part of the exhibition (from Nocturna Artificialia) are very much artificial and definately nocturnal. They are gorgeous. Tulip II, Aurora (below) & Heartbeats (featuring splayed tulips, tightly structured gerberas and black peonies in turn) stand under what feels like a black, chemically induced rain. 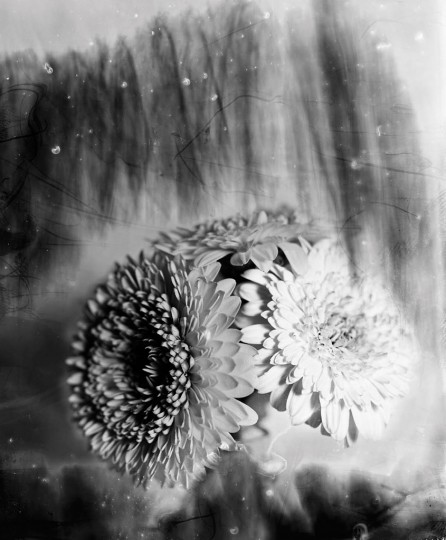 There are echoes of other, perhaps better times in several of the pieces. Pomegranates (above), a dark sill life with a mysterious halo is very much reminiscent of a Cezanne. Renaculas, a photograph of weeping roses at a glass cafe window has a special nostalgia reminiscent of Paris at the turn of the last century, and perhaps a bit of Edward Steichen.

Tulip is my favourite.  The shadows of its stamens stand up against brightly streaked petals, It’s open, sensuous and inviting.

Four layered negative prints from Uchronie Fragments round out the show. If you’ve clicked on the link on the word Uchronie and been to wikipedia to look up uchronie as I have, it’s easy to see what we’re looking at: Overlapping imagery harkening back to a more perfect time when human relationships had solemnity and grace.

Transference features two men shaking hands, their heads bowed in deference. Not a very 2011 scene, but perhaps what another 2011 might have felt like if we hadn’t slipped down the road we’re on.

In passing features five women passing something to one other, each in turn. These are actually layered photos of the same two women. Their overlapping dresses in themselves suggestive of a parallel history.

Multiverse is a scene of two men standing in expectation in a darkened theatre. Something important is about to happen.

My favourite is Ceremony. Shot from the rear, three men seemingly face the eternal in what must be a funeral. The man on the right stands stiffly – at military attention – while a boy looks away to the side. So poignant.

The exhibit, at 80 Spadina Avenue, has been held over until  Nov 26

One thought on “ Osheen Harruthoonyanat at Toronto Image Works ”